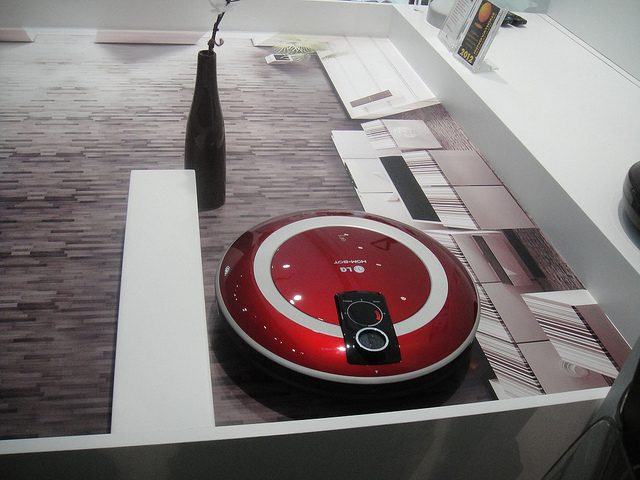 For many years, producing the most effective robot vacuum cleaner has been a top priority for many different tech firms around the world. This is probably more to do with its prevalence in certain 1980s Hollywood films than real consumer demand, but nevertheless, designs have improved considerably since I was a child, and now the high-end models are actually very functional. Still, this doesn’t mean they’re going to replace the need for human interaction anytime soon.

The main problem of course is that no matter which shape the manufacturers choose and regardless of how progressive the sensor system becomes; these devices are never going to be able to cover an entire floor space unless you’ve got no furniture, so they’re actually a bit gimmicky if you ask me. Don’t get me wrong, the second I can buy one for around £50, I probably will, but does that mean I’ll use it instead of the Dyson? Probably not.

Even so, let’s take a moment to look at some of the pros and cons of these robot vacuums before dismissing them entirely, because they do look really cool, and the idea of having an autonomous cleaner to do my bidding does sound rather appealing.

The Pros Of Robot Vacuum Cleaners

Well, the biggest and most obvious advantage is that the amount of time you spend using your hoover, and the frequency of the task should be reduced considerably. As I said a moment ago, there is no way the robots will replace your keen eye for detail or manage to cover the entire floor, but they should be able to clean the bulk of it, and that’s a big help at the end of the day.

Also, for older people with less flexible limbs and who suffer from constant aches and pains, opting to purchase one of these autonomous devices could help to ensure their homes stay in a much more acceptable state. Sometimes it’s simply not possible for elder UK residents to keep on top of their cleaning, so anything that assists them should be considered positive; I suppose.

The Cons Of Robot Vacuum Cleaners

Firstly, due to the size of these devices, they tend not to hold a significant amount of dirt, meaning most models need to be emptied after only a couple of cleans, and as they’re so near to the ground (and in some cases rather heavy), this can pose a problem for anyone who purchased the machine to ease the strain on their own bodies.

Secondly, even the high-end versions that cost around £500 are a little sloppy when it comes to sucking up everything from carpets. It’s certainly true that their function on laminate or wood flooring is impeccable, but place them on material, and the results are much less impressive. In fact, you’d probably be better getting in touch with a private cleaning company, as they provide ideal services for people in this kind of situation.

Anyway, I’m off to do some research into the next generation of robots that we should see on the market by 2016, but in answering the question posed in the title of this article, I must admit that robot vacuums, although fun to play with, are definitely a futuristic gimmick that is unlikely to ever catch on.

What’s The Deal With NFC, Anyway?

How to Clean Up Your Mac System with Movavi Mac Cleaner

The New Zeland Photographer and His ‘Psychic’ Camera